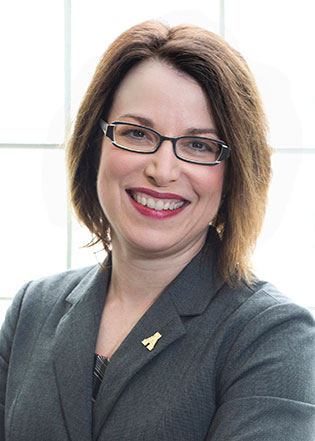 Dr. Heather Hulburt Norris joined App State as a faculty member in the Walker College of Business in the fall of 2003 in the Department of Finance, Banking and Insurance. She was named assistant dean for undergraduate programs in 2005, associate dean for undergraduate programs and administration in 2008, senior associate dean in 2012, acting dean in 2014, and interim dean in 2016. In July 2016, following a national search, Norris was named permanent dean of the Walker College of Business. In February, 2020, she was named Interim Provost and Executive Vice Chancellor, and in May 2021, she was named to the position of Provost and Executive Vice Chancellor.

Norris' teaching and research interests involve corporate finance and investments, with a particular emphasis on corporate restructuring. She has been published in the Journal of Portfolio Management, Financial Management, Managerial and Decision Economics and the Journal of Applied Business Research. Her work on corporate restructuring has been cited in The Wall Street Journal, Fortune, Business Week and Dow Jones Online News. Norris is a member of Beta Gamma Sigma and Phi Kappa Phi.

Norris served on the board of directors of Children's Hope Alliance, the parent organization of Grandfather Home for Children and Barium Springs Home for Children. She was a member of the board's finance committee and previously chaired the organization's Foundation Board. Norris has also served on the board of directors for the Boone Area Chamber of Commerce.

Norris and her husband, Rob (Appalachian '87), have a young daughter, Emma, who aspires to be a future Mountaineer.